This page describes how to bind physical keyboard events to actions in the user interface. For instance, to define keyboard shortcuts in your application, this page is for you.

That’s where Flutter’s actions and shortcuts system comes in. It allows developers to define actions that fulfill intents bound to them. In this context, an intent is a generic action that the user wishes to perform, and an Intent class instance represents these user intents in Flutter. An Intent can be general purpose, fulfilled by different actions in different contexts. An Action can be a simple callback (as in the case of the CallbackAction) or something more complex that integrates with entire undo/redo architectures (for example) or other logic. 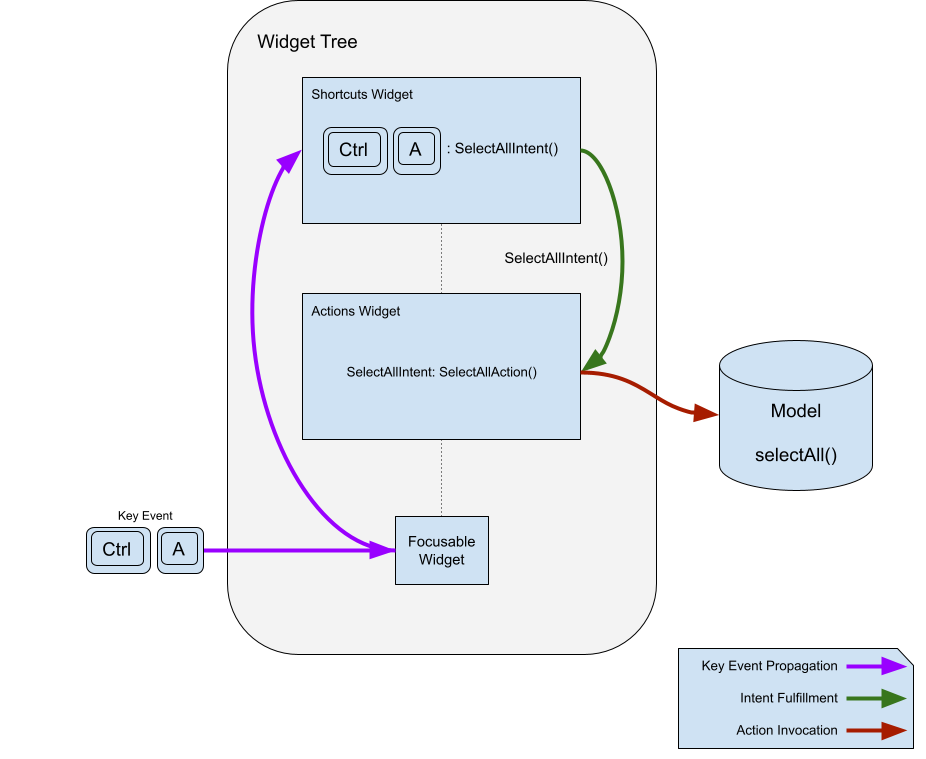 Shortcuts are key bindings that activate by pressing a key or combination of keys. The key combinations reside in a table with their bound intent. When the Shortcuts widget invokes them, it sends their matching intent to the actions subsystem for fulfillment.

To illustrate the concepts in actions and shortcuts, this article creates a simple app that allows a user to select and copy text in a text field using both buttons and shortcuts.

Why separate Actions from Intents?

You might wonder: why not just map a key combination directly to an action? Why have intents at all? This is because it is useful to have a separation of concerns between where the key mapping definitions are (often at a high level), and where the action definitions are (often at a low level), and because it is important to be able to have a single key combination map to an intended operation in an app, and have it adapt automatically to whichever action fulfills that intended operation for the focused context.

For instance, Flutter has an ActivateIntent widget that maps each type of control to its corresponding version of an ActivateAction (and that executes the code that activates the control). This code often needs fairly private access to do its work. If the extra layer of indirection that Intents provide didn’t exist, it would be necessary to elevate the definition of the actions to where the defining instance of the Shortcuts widget could see them, causing the shortcuts to have more knowledge than necessary about which action to invoke, and to have access to or provide state that it wouldn’t necessarily have or need otherwise. This allows your code to separate the two concerns to be more independent.

Intents configure an action so that the same action can serve multiple uses. An example of this is DirectionalFocusIntent, which takes a direction to move the focus in, allowing the DirectionalFocusAction to know which direction to move the focus. Just be careful: don’t pass state in the Intent that applies to all invocations of an Action: that kind of state should be passed to the constructor of the Action itself, to keep the Intent from needing to know too much.

Why not use callbacks?

You also might wonder: why not just use a callback instead of an Action object? The main reason is that it’s useful for actions to decide whether they are enabled by implementing isEnabled. Also, it is often helpful if the key bindings, and the implementation of those bindings, are in different places.

If indeed all that is needed is a callback, without all the complexity (or flexibility) of Actions and Shortcuts, you can already use a Focus widget for this. For example, here’s the implementation of Flutter’s simple CallbackShortcuts widget (available on the dev branch) that takes a map of activators and executes callbacks for them:

This may be all that is needed for some apps.

As you’ll see below, actions are useful on their own, but the most common use case involves binding them to a keyboard shortcut. This is what the Shortcuts widget is for.

It is inserted into the widget hierarchy to define key combinations that represent the user’s intent when that key combination is pressed. To convert that intended purpose for the key combination into a concrete action, the Actions widget used to map the Intent to an Action. For instance, you can define a SelectAllIntent, and bind it to your own SelectAllAction or to your CanvasSelectAllAction, and from that one key binding, the system invokes either one, depending on which part of your application has focus. Let’s see how the key binding part works:

Note: ShortcutActivator is a replacement (as of Flutter 2.3.0) for LogicalKeySet. It allows for more flexible and correct activation of shortcuts. LogicalKeySet is a ShortcutActivator, of course, but there is also SingleActivator, which takes a single key and the optional modifiers to be pressed before the key, and CharacterActivator, which activates a shortcut based on the character produced by a key sequence, instead of the logical keys themselves. ShortcutActivator is also meant to be subclassed to allow for custom ways of activating shortcuts from key events.

The shortcut manager, a longer-lived object than the Shortcuts widget, passes on key events when it receives them. It contains the logic for deciding how to handle the keys, the logic for walking up the tree to find other shortcut mappings, and maintains a map of key combinations to intents.

For example, if you wanted to log each key that a Shortcuts widget handled, you could make a LoggingShortcutManager:

Now, every time the Shortcuts widget handles a shortcut, it prints out the key event and relevant context.

Actions allow for the definition of operations that the application can perform by invoking them with an Intent. Actions can be enabled or disabled, and receive the intent instance that invoked them as an argument to allow configuration by the intent.

Actions, in their simplest form, are just subclasses of Action<Intent> with an invoke() method. Here’s a simple action that simply invokes a function on the provided model:

Or, if it’s too much of a bother to create a new class, use a CallbackAction:

Once you have an action, you add it to your application using the Actions widget, which takes a map of Intent types to Actions:

The Shortcuts widget uses the Focus widget’s context and Actions.invoke to find which action to invoke. If the Shortcuts widget doesn’t find a matching intent type in the first Actions widget encountered, it considers the next ancestor Actions widget, and so on, until it reaches the root of the widget tree, or finds a matching intent type and invokes the corresponding action.

The actions system has several ways to invoke actions. By far the most common way is through the use of a Shortcuts widget covered in the previous section, but there are other ways to interrogate the actions subsystem and invoke an action. It’s possible to invoke actions that are not bound to keys.

For instance, to find an action associated with an intent, you can use:

This returns an Action associated with the SelectAllIntent type if one is available in the given context. If one isn’t available, it returns null. If an associated Action should always be available, then use find instead of maybeFind, which throws an exception when it doesn’t find a matching Intent type.

To invoke the action (if it exists), call:

Combine that into one call with the following:

Sometimes you want to invoke an action as a result of pressing a button or another control. Do this with the Actions.handler function, which creates a handler closure if the intent has a mapping to an enabled action, and returns null if it doesn’t, so that the button is disabled if there is no matching enabled action in the context:

The Actions widget only invokes actions when isEnabled(Intent intent) returns true, allowing the action to decide if the dispatcher should consider it for invocation. If the action isn’t enabled, then the Actions widget gives another enabled action higher in the widget hierarchy (if it exists) a chance to execute.

The previous example uses a Builder because Actions.handler and Actions.invoke (for example) only finds actions in the provided context, and if the example passes the context given to the build function, the framework starts looking above the current widget. Using a Builder allows the framework to find the actions defined in the same build function.

You can invoke an action without needing a BuildContext, but since the Actions widget requires a context to find an enabled action to invoke, you need to provide one, either by creating your own Action instance, or by finding one in an appropriate context with Actions.find.

To invoke the action, pass the action to the invoke method on an ActionDispatcher, either one you created yourself, or one retrieved from an existing Actions widget using the Actions.of(context) method. Check whether the action is enabled before calling invoke. Of course, you can also just call invoke on the action itself, passing an Intent, but then you opt out of any services that an action dispatcher might provide (like logging, undo/redo, and so on).

Most of the time, you just want to invoke an action, have it do its thing, and forget about it. Sometimes, however, you might want to log the executed actions.

If you want a log of all the actions invoked, however, you can create your own LoggingActionDispatcher to do the job:

Then you pass that to your top-level Actions widget:

This logs every action as it executes, like so:

The combination of Actions and Shortcuts is powerful: you can define generic intents that map to specific actions at the widget level. Here’s a simple app that illustrates the concepts described above. The app creates a text field that also has “select all” and “copy to clipboard” buttons next to it. The buttons invoke actions to accomplish their work. All the invoked actions and shortcuts are logged.